Garry Kalajian was born in 1956 in Jersey City, N.J. and has degrees in music and education. He became interested in blacksmithing in the early 1980’s while teaching at an outdoor school, and in 1993 switched to full-time blacksmithing.

Mr. Kalajian operates Ararat Forge, producing functional pieces based on both historic and original designs. The common denominator is the nearly-exclusive use of traditional tools and techniques.

In 2005 he helped establish a blacksmithing teaching studio at Sanborn Mills Farm in Loudon, N.H., where he currently teaches. He is a resident artist at The Holderness School in Plymouth, N.H., and has received grants from the State of N.H. to train aspiring smiths. In 2006 he presented a “New England Door Hardware” workshop to a group of Swedish blacksmiths near Lerum, Sweden, and has done many public demonstrations.

Mr. Kalajian has been a juried member of the League of N.H. Craftsmen since 1995. He is a metal juror and former Chairman of both the Standards and the Gallery 205 Committees, and served on the Board of Trustees. He lives and works from his home studio in Bradford, N.H. 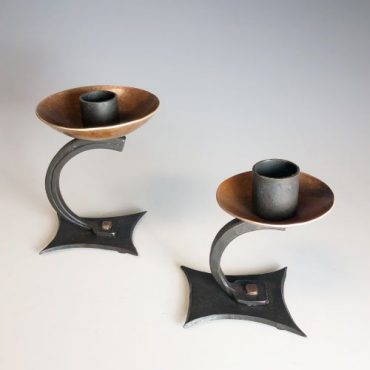