Ruth Boland has been a basketmaker since 1991,a state-juried member of the League of NH Craftsmen since 2002, and is a past member of the Board of the Northeast Basketmakers Guild. Her hand shaped baskets often involve strong colors, intricate patterns and a contemporary feel. Ruth has shown her work at juried exhibits throughout New England, including the Guilford Handcraft Center in CT, the NH Institute of Art in Manchester NH, the League of NH Craftsmen’s Gallery and Living With Craft Exhibits, the Slater Mill Museum in Pawtucket RI, and Gallery One in Nashua NH. Ruth’s work has also been included in “500 Baskets”. In 2010 Ruth opened the LNHC Nashua Retail Gallery. 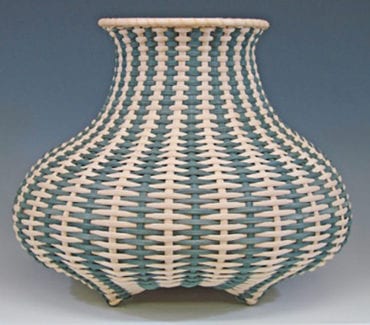